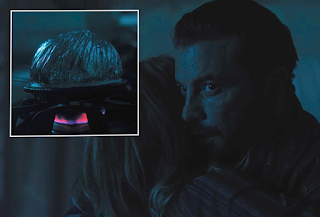 The CW's hit show Riverdale has turned in another classic horror nod -- this time an homage to Scream.


“There’s a lot of Scream in that one,” Ulrich acknowledged with a laugh during TVLine’s recent set visit. “Yeah, we were very aware of the Scream components… I mean, it’s impossible not to [be], to be honest. It’s so apparent what the source material was.” But Ulrich approved of the meta nod to his breakout role: “It was cool… I think, in a way, they took components of [Scream] and used it in an interesting way.”

He went on to discuss how the window scene was done in Scream...


Shooting the scene did give Ulrich one very specific flashback to filming Scream: “When we shot that scene outside of Napa Valley [for Scream], it was a real house, and they had built this ledge onto the roof for me to squat down on and wait for the cue, and I climbed in. This one, I got to climb a real ladder… so our show’s better.”