SARAH DARLING IS A BITCH 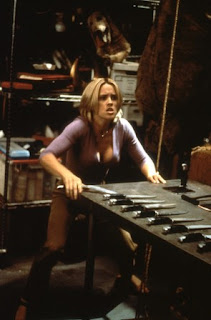 "I love horror movies," says Jenny McCarthy, who turns up in SCREAM 3 as Sarah Darling, an actress strutting her stuff in the latest STAB sequel, the film within the film. "I had always wanted to do one. There are a few horror movies that scarred me for life. THE EXCORCIST made me very religious as a child. I slept at nigh with rosaries and the Bible after that one. PLTERGEIST scared me. THE SHINING scared me. What else scared me? Oh, A NIGHTMARE ON ELMSTREET. And now I can at least say I did one. It's fun to get creepy, to scare people and yourself. It was really cool."

So what can McCarthy- the ex-Playboy bunny pinup-turned-comedienne-turned-actress whose credits include SINGLED OUT, MTV's underrated sketch program THE JENNY MCCARTHY SHOW and NBC's deservedly short-lived sitcom JENNY, as well as the film THINGS TO DO IN DENVER WHEN YOU'RE DEAD, THE STUPIDS, and BASEKETBALL-reveal about the top secret SCREAM 3, supposedly the last in the hit slasher series? Not much, but a bit more than nothing.

"I am a bitch, a bitch," notes the actress, who had seen the earlier two SCREAMfests at the time of their respective releases, but didn't go back and screen them again as part of her SCREAM 3 preparation. "I don't think the character was necessarily written that way, but I kind of went there with it because it was more fun to play. I'd never played a bitch before. The character is very actress-y. To tell you the truth, I have no idea what the movie is about. I was given my pages only. So, in terms of who the killer is, I'm really pathetic. I don't even know. They probably shot multiple endings anyway. At least you know I'm not the killer."

McCarthy was originally slated to appear in Dimension's slasher spoof SCARY MOVIE, but wound up departing and being replaced by rapper Lil' Kim. And the actress who appears as a hooker with a heart of gold opposite Kirk Douglas and Dan Aykroyd in the current comedy/drama DIAMONDS-and who married its director, John Asher, a few months back-reports she enjoyed her days on the SCREAM 3 set.

"It was so much fun to make the film," she raves, "I worked a bit with Patrick Dempsey and Parker Posey, and Wes Craven was a hoot. I'd have to enter a scene by opening a door and going inside a scary building. Before he's call ACTION, they'd say 'Sound rolling' and I'd hear Wes go (imitating his soft spoken tones) "Ohhh, that building looks scary. I'm afraid….ACTION" That can make you laugh before a scene, but it was great. He's got a sense of humor and it just a nice, peaceful, easygoing guy. I was totally surprised. I thought he'd be a little psychotic or wild, and he was like a sweet little dad. I was blown away. I didn't really do very much, so the whole thing was pretty new to me. I can't wait to see how it all comes together."