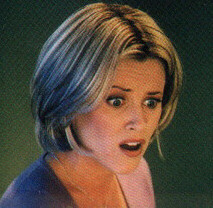 Also, Popcorn was able to get a tiny interview with David. Here is what he had to say...


After two attempts on his life, Dewey Riley is back for more. Actor David Arquette confirms he has wrapped work on 'Scream 3', Wes Cravens' final chapter of the blood-soaked trilogy. "It feels liberating," he jokes at having finally shaved the mustache worn by his local cop character. But Arquette is more serious when it comes to disclosing secrets about the movie, although he does confirm Carrie Fisher's appearance in the cast, and reveals sketchy details of the plot.

"It's kind of weird because we're not supposed to tell too much," he says. "But I'll just say she works in a studio and the whole movie takes place in Hollywood."
'Stab 3', a sequel to the movie-within-the-movie, is said to be the arena for the new slayings, but all Arquette will reveal is that, "It's behind the scenes of a movie. There are cast members that are actually playing Courtney's character and my character and stuff like that."