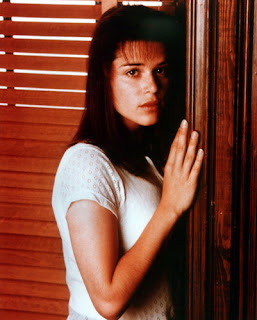 On the Fox drama Party of Five, Neve Campbell's character Julia Salinger has been through a lot. She's lost her parents; watched her brothers suffer from cancer and alcoholism; maintained some unhealthy relationships, the most recent of which involved domestic abuse; and is now about to embark on a lesbian fling while on the rebound.

All of this tragedy has held audiences rapt, but in the latest issue of Jane magazine, Campbell says, "[Any] job, if you've been doing it for a while, can become monotonous. I've been playing the character for the last five years."

This stagnancy makes 25-year-old Campbell's contract end date a positive, if bittersweet, milestone. "[After April 2000], I'll have a life and take time off whenever I want, and do movies if I want." She's already had a successful movie career to date, starring as tormented heroine Sidney Prescott in the Scream trilogy. Scream and Scream 2 took in a combined $200 million in ticket sales, leading to the forthcoming Scream 3. Campbell also starred in 54 (but no one's likely to hold that against her), and the campy Wild Things.

Those films aside, Campbell says the project she's most enjoyed working on lately is Hairshirt, featuring her brother Christian. The film premiered at the Toronto Film Festival in 1998, but there's been no word on a release date since.

One thing Campbell doesn't enjoy is her lack of independence on the set. "You spend 14 hours a day with people bringing you coffee, doing your hair and makeup, and telling you when you can eat or when you can go the bathroom," she says. "As for me, I hate that stuff. I love doing things for people [and] would love to have the time to get my own coffee."

With fewer than 365 days before Campbell can taste freedom, she'll see how the Po5 audience reacts to her experimental, three-episode liaison with a lesbian. Julia's Sapphic interest is played by another refugee from primetime, Olivia d'Abo, who was Kevin Arnold's older sister on the apple-pie-and-Wonder-Bread The Wonder Years. And if d'Abo has an accent for the episodes, it's real — the British-born actress affected a convincing American tone for Years.

It's not Campbell's first filmed jaunt into all things multisexual: She had a steamy menage-a-trois in Wild Things with co-stars Matt Dillon and Denise Richards, and Jane reports that Campbell's character in the new film Three to Tango tells her friends about her affair with a Brazilian girl. (Teeny tiny spoiler ahead.) On Po5, however, the New York Daily News reports that the affair will culminate in a simple kiss.